Trump The review follows concerns about potential conflicts of interest.May 12, 2020, 8:23 PM7 min read
The inspector general for the Department of Interior has launched an investigation into possible ethics violations by a senior Trump administration official who was overseeing the distribution of $8 billion of coronavirus relief funds for Native American tribes.

Democratic lawmakers requested a review of Interior Assistant Secretary for Indian Affairs Tara Sweeney’s conduct after concerns were raised about potential conflicts of interest because of her lingering ties to her previous employer, Arctic Slope Regional Corporation, one of the Alaska Native corporations seeking stimulus funds through the CARES Act.

In a letter to Sen. Tom Udall, a Democrat from New Mexico who had requested the review on April 27, the Department of the Interior Inspector General Mark Lee Greenblatt confirmed that a joint investigation with his counterpart at the U.S. Department of the Treasury was underway.

“In late April, my office initiated an investigation into allegations that DOI improperly released sensitive data from tribal governments’ CARES Act applications,” Greenblatt wrote on May 8. “We are also reviewing the actions of Department officials to determine whether there was adherence to ethics rules and regulations and compliance with the ethics pledge as it relates to CARES Act funding.”

Sweeney once served as a top executive and lobbyist for Arctic Slope Regional Corporation, the wealthiest native entity that applied to receive the stimulus funding, and she remains a shareholder in her former employer. More than a dozen tribes sent letters to the agency in mid-April demanding her recusal from the distribution process because of those financial ties.
That was before the Western Values Project, a Montana-based conservation advocacy group, revealed another potentially serious conflict of interest: Sweeney’s husband is a lobbyist for an Alaska Native corporation that also received some of those funds.

Kevin Sweeney is a registered lobbyist for Bristol Bay Native Corporation, another of the thirteen Alaska Native Regional Corporations, which owns the largest commercial salmon fishery in the state. U.S. Code requires government officials to recuse themselves from working on projects in which their spouses have a financial interest, but according to Politico, Sweeney was among a group of officials who advised the Treasury Department on the distribution of funds for Native American tribes.

“This new, additional potential conflict of interest is also serious and it should be fully examined by the Inspectors General,” Sen. Udall told ABC News on Friday. “Tribal governments have already waited nearly six weeks for these badly needed resources. The Trump administration’s troubled handling of the distribution of Tribal government relief cries out for robust oversight as Indian Country is experiencing some of the worst impacts from the COVID-19 pandemic.”

When reached for comment by ABC News, the Department of the Interior issued a brief statement.

Help us tell more of the stories that matter

“At the time when this was first reported, the Secretary requested the Inspector General review the matter of the CARES Act data,” the statement said. “Assistant Secretary Sweeney is upholding her ethical responsibilities and complies with all laws and regulations. She relies on the advice of career ethics officials to ensure compliance with applicable statutory and regulatory requirements.”

Kevin Sweeney did not immediately respond to a request for comment from ABC News.
Native Americans have been disproportionately affected by the pandemic. According to latest data from Indian Health Services, there have been 5,255 reported cases of coronavirus among tribal members. In New Mexico, for example, Native Americans make up less than 10% of the population but over one-third of coronavirus cases. And state-enforced bans on large gatherings have shuttered casinos, a key source of employment and revenue for many tribes.

The CARES Act provided funds to Indian tribes and tribally-owned businesses to provide much-needed relief and manage the costs of their COVID-19 responses. Alaska Native Corporations, for-profit businesses which serve tribal villages in Alaska, have argued that they are “tribes” under the law.

“We believe that ‘a rising tide lifts all boats,’” said Chairman of the Board and Interim President and CEO Sheri Buretta of the Chugach Alaska Corporation in a statement. “There needs to be relief funding for all vulnerable populations and indigenous communities across the nation.”

But tribes have pushed back against qualifying Alaska Native Corporations as federally recognized tribes, arguing that money to the for-profit corporations doesn’t directly benefit tribes in the same way a direct payment would. Shannon Keller O’Loughlin, Executive Director of the Association on American Indian Affairs, one of the organizations that demanded Sweeney’s recusal, accused Sweeney of “taking much needed relief” from tribes.

“She has financial ties to one of these corporations,” O’Loughlin said. “This just flies in the face of the federal law and the government to government relationship that tribes have with the United States that is based on our Constitution.”

Jayson O’Neill, the director of The Western Values Project that has been pushing for transparency on the issue, said that this is another clear violation of ethics laws.

“It’s inexcusable that COVID-19 relief funds that are supposed to be going to struggling Native American communities have been delayed by officials trying to line the pockets of special interest lobbyists,” O’Neill said. “The fact that Assistant Secretary Sweeney meddled in this decision before she came clean about her and her family’s finances certainly raises some serious questions. This is yet one more example of the so-called public servants at Secretary [David] Bernhardt’s corruption-plagued Interior Department trying to use government resources to enrich themselves and their families.”
What to know about coronavirus: How it started and how to protect yourself: coronavirus explained What to do if you have symptoms: coronavirus symptomsTracking the spread in the US and Worldwide: coronavirus map
Tune into ABC at 1 p.m. ET and ABC News Live at 4 p.m. ET every weekday for special coverage of the novel coronavirus with the full ABC News team, including the latest news, context and analysis.

We hate SPAM and promise to keep your email address safe 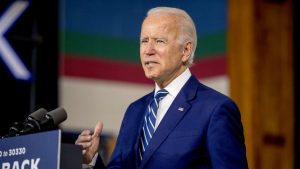